Fell in love in Rexburg, Idaho & some very emotional Dad toasts will bring tears to your eyes. 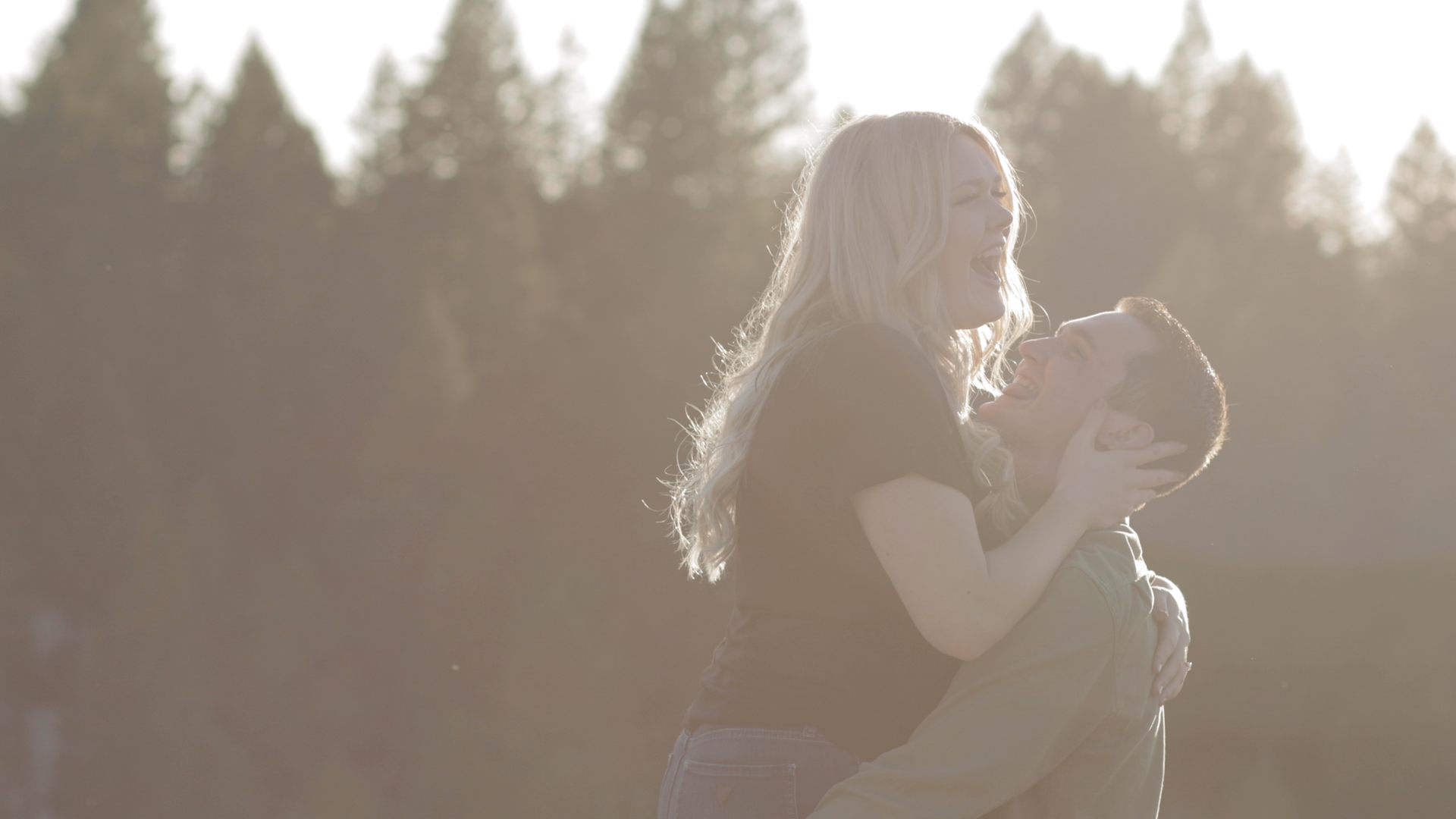 Brooklyn and Braxton met in Rexburg Idaho while attending BYU Idaho. Brooklyn’s mom reached out to me as she was the one trying to find a videographer for her daughter’s wedding. Because their family was from Canada they would be making the trip from Canada to Northern Utah. After talking to her about the wedding day we briefly discussed me potentially driving up to Rexburg Idaho to film an engagement session with them, get to know them a little bit, and record them talking about their relationship and how they met. Natalie (Brooklyn’s mom)and Brooklyn loved the idea and within a few days, we got it all set up.

As I was driving up to Rexburg I kept thinking over and over again of going to the places that were meaningful to Brooklyn and Braxton that we had discussed a park where they were Braxton had proposed, to the soda shop where they had spent much of their time going out. And as I got to those locations I was able to capture moments of them being relaxed and comfortable. I think this really helps me and my couples to connect better when they are in areas they are familiar with.

After a very fun and cute engagement session, I was able to interview Brooklyn and Braxton for a bit and see just how genuine their love for each other was. Being able to record them talking in person, and getting that audio truly helped me film and create that much more of a personal video for them.

For my creative friends and fellow vendors, I highly recommend getting to know your couples not only does it allow you guys to be more comfortable with each other and not feel like strangers on the wedding day. But it allows you to serve them better because you know them and therefore you’re able to take who they are and what they like and love and consideration and to be creative with your work while taking those things into mind.

Couples I know there’s a lot of planning that goes into a wedding and it can be stressful to know you have to spend an hour or two to maybe talk with your vendors that you’re going to have for your wedding day. But as one of the main ones that will be with you 100% throughout the day as a videographer and/or your photographer highly recommend sitting down and having a conversation with them and getting to know them. Getting to know who is going to be there not only capturing your day but interacting with your guests and serving you is probably one of the most overlooked things when it comes to finding a vendor. And as a vendor that is going to be a part of your day I want to get to know you I want to get to know your guy’s story because that will help me to be able to better serve you guys and to have a better connection with you throughout the whole process.

Brooklyn and Braxton were sealed in the Logan LDS temple early in the morning. I got to meet the photographer that I’d be working with Kenzie who is an absolute dream to work with and a stellar huge part of our industry, especially in Utah. We then moved to their reception at Mount Naomi Vineyards after taking some family portraits. Living in Logan Utah while attending USU there are a lot of things that are beautiful about the valley. But, Mt. Naomi Vineyards has one of the most incredible backdrops where the outdoor ceremony area you can see the beautiful Cache Valley Mountains.

Something really special about the ceremony was that they had a live harpist play the music for the ceremony. Why this was so important and special is because Brooklyn also played the harp and was very musically inclined. Braxton‘s grandpa officiated the wedding and tighten their religious beliefs really well with the ceremony as well as gave them some advice for their marriage.

The reception had so many amazing things going on, tons of food and games going on, and a soda bar of course! Underneath the tent, Braxton‘s dad performed a magic show for the guests, and Braxton’s dad somehow managed to get a Rubik’s cube inside of a glass box. It was really cool to see how he perform some real magic in front of our eyes and then tied into their marriage.

As dinner commenced we were surprised by Brooklyn‘s dad of two very TikTok famous singers from Utah a daddy-daughter duo who I unfortunately forgot. As dinner went on they sang a bunch of amazing songs and it was really special as Brooklyn has a music background where she herself played the harp and sang.

As dinner wrapped up we moved on to the cake cutting portion and the dancing. The dancing was really special for Brooklyn because Brooklyn’s dad gave a toast about how when she was younger they went to a barn and they danced together and people said that she was the prettiest girl in the entire room. To which he agreed and then he said that he’s going to dance his daughter again in a barn and she definitely has the prettiest girl in the room and that he’s so excited for her and this next step in her life.

As dancing with everyone was young and old was dancing on the floor, the night eventually ended with Brooklyn and Braxton getting ready to leave as the sun was setting and what was a spectacular day of the wedding.

Finally catching up with sharing my work for the n

“It is often said that the ideal marriage is lik

Teaser from this past weekend! Allie & Isaaks wedd

Monica + Michael Here is a teaser from the amazin

Met these two in Sedona while shooting a branding