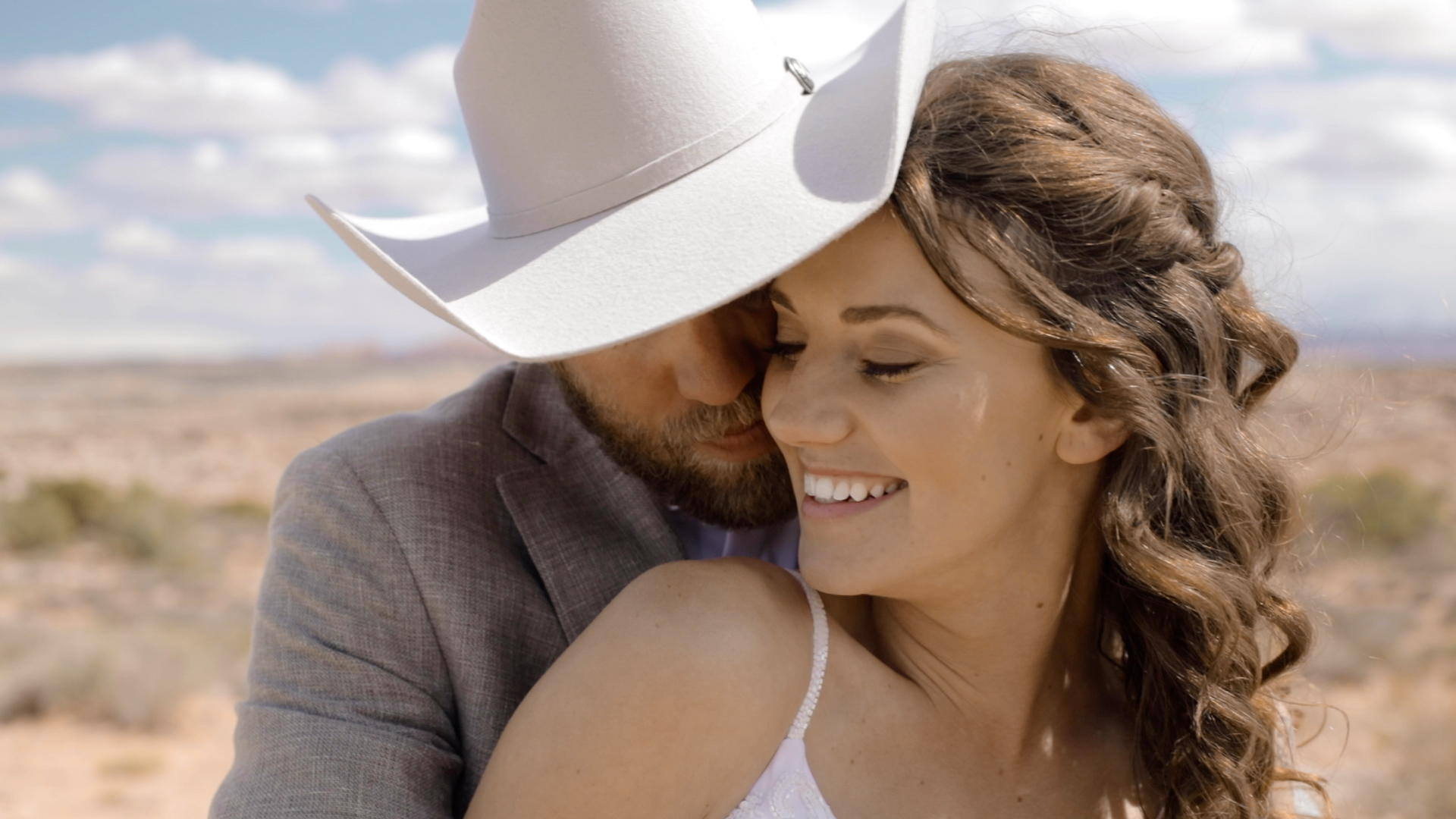 Filming an elopement can be a lot of fun. It's a more relaxed, intimate wedding to film. Plus, you usually get the couple all to yourself for most of the day. Having that extra time with the couple can allow for some really great moments for the wedding video. Elopements can also be a little tricky since they often take place on very short notice. In this blog post, I'll share how I filmed an elopement with only 2 days' notice and was able to officially be a Utah Elopement Videographer!

2 Days Before the Elopement

So it was 11 o’clock on a Monday evening. I was sitting in my bed watching one of my favorite wedding filmmakers, 31 Films, latest work when I got a DM from Alex of Forever To The Moon on Instagram asking if I was available to film an elopement. In Moab National Park. This Wednesday. So naturally, I had to jump on a phone call because this is a dire situation.

Alex explained that she had teamed up with a group of incredible vendors to give one couple a chance to win an all-inclusive elopement in Moab, UT. Unfortunately, the elopement videographer who was going to film got COVID-19 and wasn’t going to be able to make it. An opportunity of a lifetime for me as I was wanting to film a Utah elopement being that I was mainly a wedding videographer.

Now if you know me or are learning about me, I consider myself a fairly spontaneous person and stuff like this gets me excited. But, at the time I had a part-time job so I needed to make sure that I could take a few days off to travel because I lived in Northern, UT. My amazing boss, Josh Larsen, agreed to let me take a few days off to go and film this incredible Utah elopement.

So when I got home from work, I packed up my gear and called Alex an amazingly talented elopement photographer (a.k.a. my new homie) to let her know that I was on my way for this EPIC day.

Driving down, my mind was already racing as to how to film, how I was going to give 120% to filming this elopement and pondering the cinematic film I’d create. I’m an all-or-nothing kind of guy and as one of the greats Ben Hartley said, “Put the same effort into work that you do for free as you would to someone paying you the big bucks.” (Kinda paraphrasing a little here, but you get the point.) I wanted to make this film special for the couple and I was fortunate enough that it would be a stellar portfolio piece for me being in beautiful Southern Utah.

With filming an elopement I knew that my approach would have to be different from a typical wedding day. On a wedding day, I tend to bring all my gear with me and am prepared for the entire day. For an elopement I was shown just how small and intimate they are and how bringing a lot of gear with you can take away from the authentic moments and make the videography seem cumbersome.

I arrived just outside downtown Moab at the place where the vendors were staying and became fast friends with the other vendors that I was going to work with tomorrow. We went to bed because it was late…. like past midnight… so that we could be well-rested and ready for an amazing day that we knew was gonna be so much fun.

Morning Of The Elopement Day

You know, Moab is incredible on its own. Its red rock, deep canyons, and desert life are something out of a storybook. But Sam and MacKenzie are some of the coolest, down-to-earth, high-energy people that I’ve had the joy to meet and they really elevated my Moab experience. Not knowing the couple before can make the wedding videography difficult. But after quickly meeting both Sam & Mackenzie I became fast friends and was able to know how I was going to film their special day.

Sam was a cowboy from the south, with the southern charm and great laugh I enjoyed talking to him about how he met MacKenzie. Sam was excited to see MacKenzie in her dress and the way he talked about her, you could tell how much he cared for her. MacKenzie was so giddy and kind, and she was excited to be in an incredible place like Moab to get married to her soon-to-be husband. Her wedding dress was stunning and I was able to learn more about her and her company and how she and Sam met.

We started the day at Undercanvas Moab, where some close friends and family were able to stay and it allowed MacKenzie’s dad to see her in her dress without having to go too far. Then, we went to an old church down the road to let Sam see MacKenzie in her stunning dress and oh—her bedazzled crocs (she was bougie as f*#k). They shared their special moment by allowing their best friends and parents to watch, we took some great family photos, and then we went back to Undercanvas for a quick lunch and some detail & bridal shots.

The beauty of an elopement versus an all-day wedding is that you have time to relax and simply enjoy the day, which also allows for more opportunities to get more incredible footage. Wedding videography sometimes has to be planned out with a wedding day. But an elopement helped me to look for moments with family and friends as well as capture the important moments that couples will cherish forever. The more footage that I have, the more that I can use to create the final film.

Midday Of The Elopement Day

After our lunch, we headed to Arches National Park to perform the ceremony and to get Sam and MacKenzie hitched! The ceremony was special, Berlynn (our amazing officiant) was incredible, and we were fortunate that other travelers and adventurers were quiet for MacKenzie and Sam. After a quick shotgun, we spent the rest of the afternoon exploring Arches and taking pictures in all the amazing places that we were allowed to visit.

Something to make sure to ask your vendors is permits and licenses needed to be in these areas. Each and every park is different and has different rules as to where to go. If you find an elopement photographer or elopement videographer who says you don't need those I would be cautious as you can be fined for being in areas you aren't supposed to. Even more important is someone who knows about the wildlife in these areas to ensure that you can have amazing photos and videos while being respectful and mindful of the wildlife and vegetation.

The phrase from this trip was “tiptoe around the crypto” (Sam came up with that one), which I learned from Halie (our amazing second photographer) that crypto is an organism/a plant that helps other plants get the nutrients they need in the desert. There was a ton of crypto but as soon as you step on them they die… so definitely “tiptoe around the crypto'' that way our beautiful deserts can stay nourished and continue thriving.

Evening Of The Elopement Day

As we headed back to Undercanvas for the evening we noticed our light was leaving fast, so we cut the cake and everyone enjoyed a slice inside the main tent. (It was incredible, probably the best wedding cake I’ve had tbh.) Then we headed to the pavilion for MacKenzie and Sam’s first dance as Husband and Wife. The night was cooling down, the stars were slowly coming out, and the beautiful song by ( ) was playing as MacKenzie and Sam danced under the stars.

Choosing music for wedding videography is an important part of the process and while I can't always use popular songs I do take into consideration the couple, the big day, and the feeling of where we are.

It was truly one of the most incredible experiences that I was able to be a part of and one of the coolest couples that I got to film. I mean, all my couples are cool but this one was extra special considering the circumstances. I also now feel that I can use the phrase Elopement Videographer officially now that I've filmed an official elopement too. So I hope you enjoyed the film and if you read this all the way through, I really appreciate you.

Now for a list of the incredible vendors that I worked with who helped make this elopement happen:

Photo – Forever To The Moon

Monica + Michael Here is a teaser from the amazin

Met these two in Sedona while shooting a branding

Seda + Alex Here is a small glimpse into Seda and

Teaser for a wedding I associate filmed last year

Branding Videos!!! Mattea reached out to me to do